Noris and Kathleen Burgener were both born and raised in the beautiful Teton Valley. Noris can remember from the time he was eight years old sweeping the floor and cleaning the shop of his father, Dave Burgener, who just recently passed away at the age of 93. Dave was a master mechanic and knew the art of body and fender repair. Noris’ brother, Tom Burgener, enjoyed the mechanical end of the business; while Noris preferred the auto body repair shop work. Any opportunity Noris had to do body work and paint cars, that is what he did. That time lead to Noris painting his first car complete when he was just 11 years old. Dave continued teaching Noris until eventually he was able to do auto body repairs for other people himself. 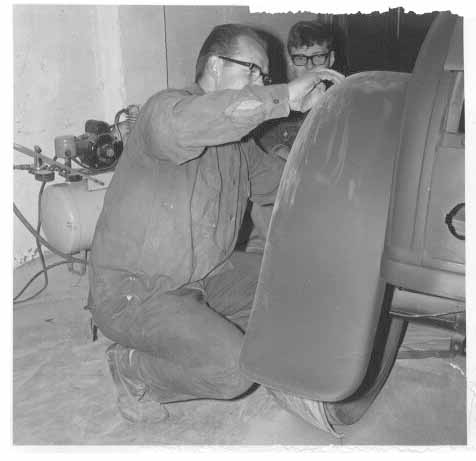 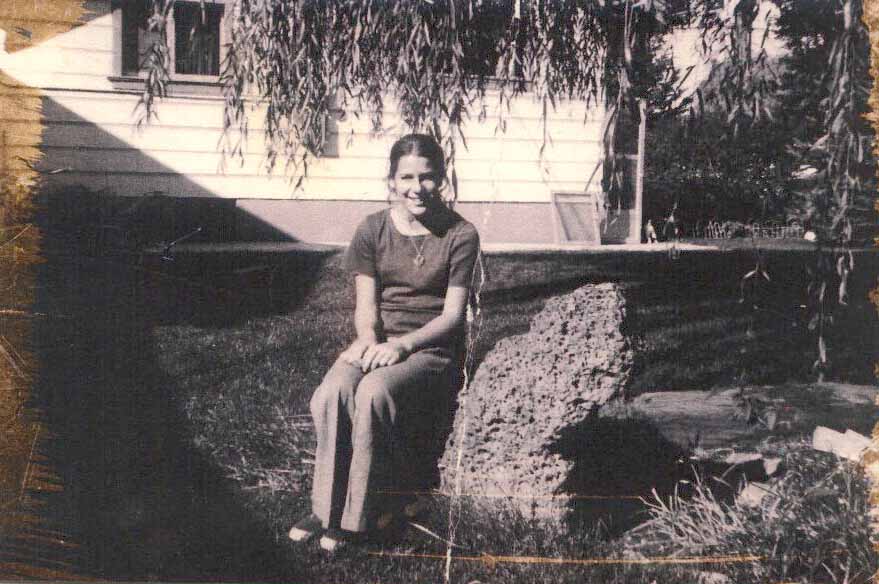 When Noris was beginning his senior year of high school, he married his sweetheart of now 51 years, Kathleen Ure, in 1958. In June of 1959 David Burgener, their only son, was born. Noris and Kathy continued to spend the next three years living and working in Teton Valley.

When Noris was growing up in Teton Valley he had the opportunity to work for his uncles on their various construction projects. During that time he developed his love of operating heavy equipment and wreckers. Consequently in 1961 Noris, Kathy and David moved to Harriman Tennessee to work with Noris’ uncles in construction.

In 1963 Noris, Kathy, David and a new little bundle, HevenLee, arrived back in town, this time they settled in Idaho Falls. Noris worked the next three years for various body shop owners and in a service station. In 1967 he worked in a fabricating shop and then in April of 1968 Noris rented a shop underneath the old Shamrock Bar next to the stock yards on the Northgate mile. He was able to continue his love of auto body repair and building his own cliental. In the mean time a home came up for sale on Lincoln Road. Noris and Kathy put in an offer and it was accepted. The property consisted of a home on ¾ of an acre with a 2 car garage. Two weeks before Thanksgiving of that same year Noris and Kathy moved into their first home where they still continue to live 41 years later. 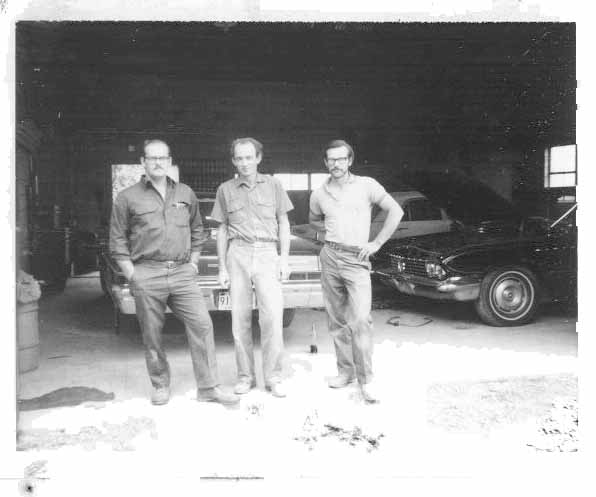 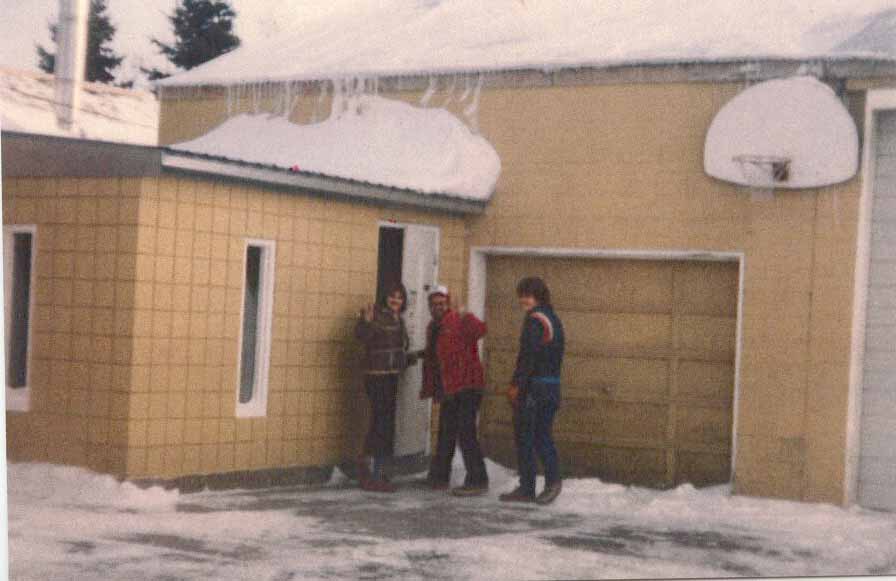 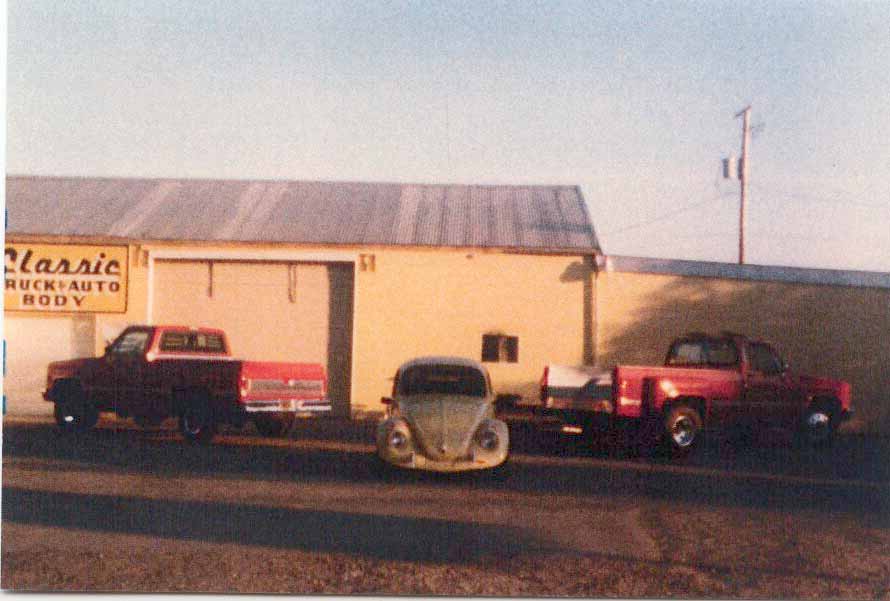 The Monday after Thanksgiving Noris and Kathy opened up for business in their two car garage and thus was born Classic Auto Body. For over a year it was just Noris and Kathy working their small business doing all the repairs them selves and raising their four children. Since moving to Idaho falls, Noris and Kathy welcomed two more daughters into the world, Kimberly and Audra.

As Noris and Kathy started to see their business growing and building a name for themselves, it was time for Noris to hire another body man and a helper. Kathy became a fulltime secretary and a mom raising their three daughters. Noris and his son David were pretty much inseparable. David followed his dad around the body shop and learned the auto body trade. Life was sweet and busy as Classic Auto Body quickly became a leader in the auto collision repair industry. Because of their success Noris and Kathy developed an honorable name for themselves in this community, and are well respected. They have seen many, many changes in this city as well as in the collision repair industry, always remaining the leader in Idaho Falls, since its humble beginnings on Lincoln Road. Since 1968 Noris and Kathy have grown their business to include large fleet repair and towing. With a total combined floor space of twenty two thousand feet on twelve acres.

Noris’ love of heavy equipment and wreckers propelled him into the towing business. Noris built his first one ton wrecker in 1972. Then he bought a ten wheeler and put a brand new 750 wrecker unit on it. He was soon operating and running six wreckers, all while running a successful auto body business. At this time the business was renamed Classic Truck and Auto Body. Noris was a workaholic and loved his wreckers, as you can imagine Noris had the most successful wrecker business in the Idaho Falls and surrounding areas. Noris has downsized since his earlier days, but Noris still runs a successful towing business now called Classic Towing.

Along with joy there is always sorrow and trials. Such was the case in June 1993 when Noris and Kathy’s only son was tragically killed on his V-65 motorcycle on John Adams Street in Idaho Falls. At the time David was the manager and was planning to buy the business from his mom and dad when they were ready to retire. David left behind his grieving wife Shelly, two young sons, Levi and Brandon and a daughter Kristee.

Noris and Kathy carried on, as difficult as it was, but it has never been the same for them and has been their greatest trial. Due to their loss they needed to hire a new auto body manager. A year later they approached their son-in-law Brent Hoopes, who had been working as a fabricator for 11 years, about becoming the manager and some day having the opportunity to buy the business when they were ready to retire. Brent accepted and thus began his training under the direction of his father-in-law Noris. They have developed a wonderful relationship and great mutual respect. Brent did an awesome job and was well respected by the employees and customers because they truly loved his positive, happy and friendly customer service. 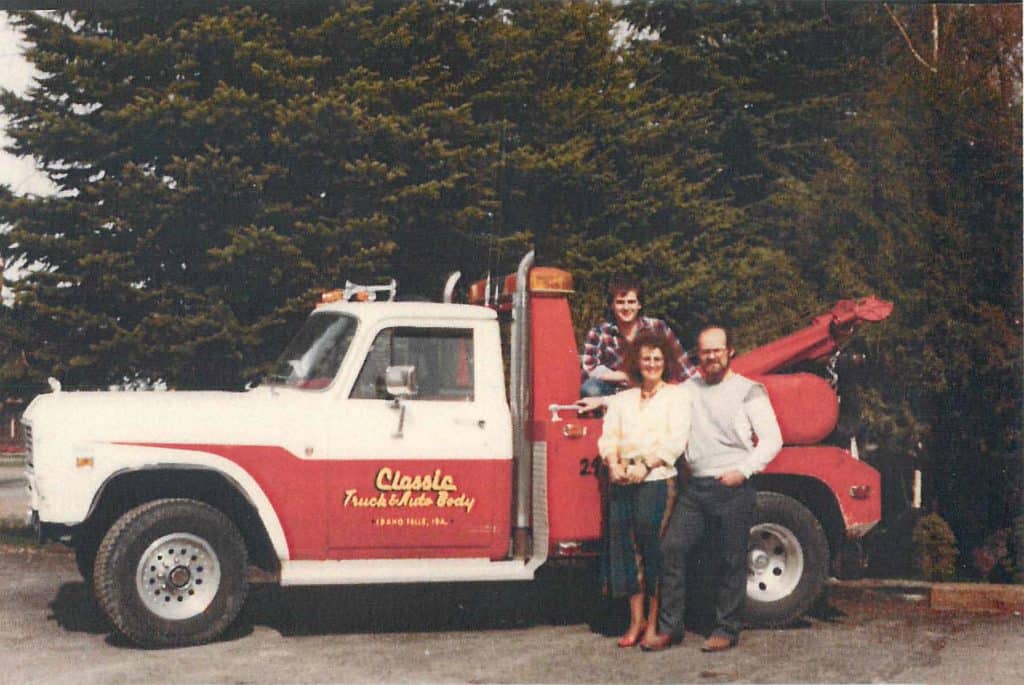 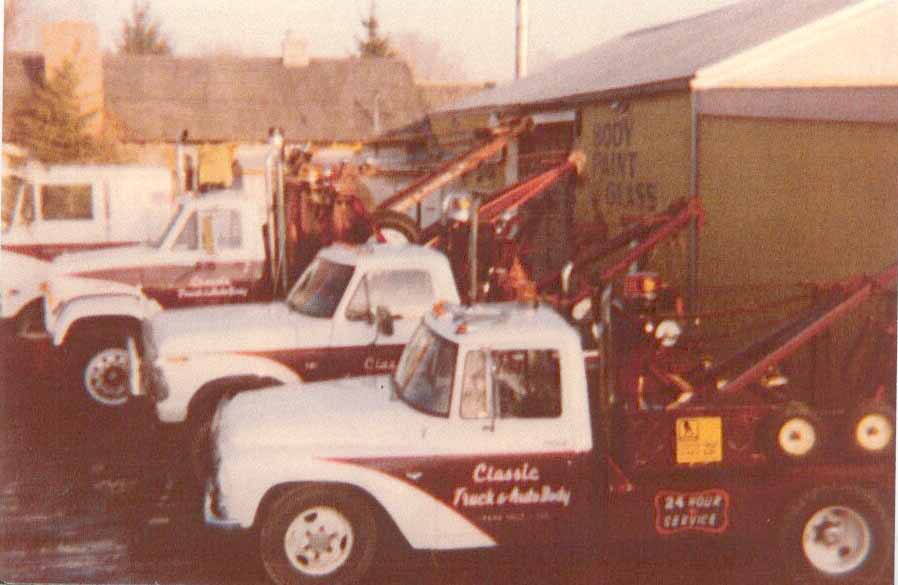 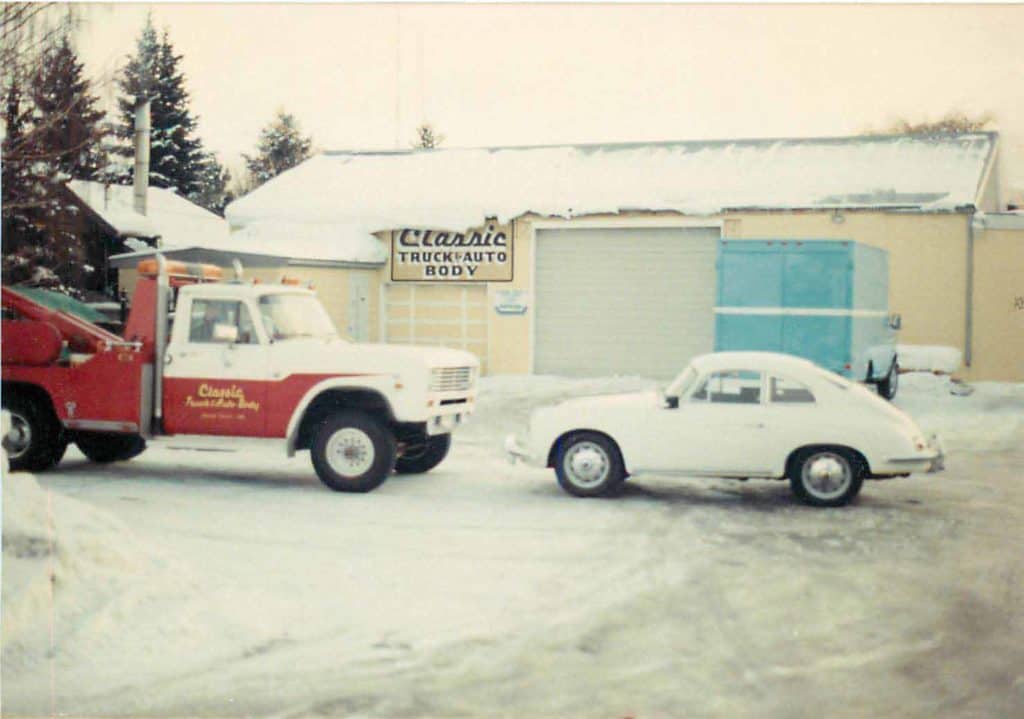 Kathy retired from the business in 1994. Her oldest daughter HevenLee took her place as the secretary. Through HevenLee’s teenage years she can remember running parts and answering the phones. HevenLee also remembers when her dad bought her a totaled 1970 convertible Volkswagen for her when she was 12 years old. She was so excited to get to drive it someday, and it was ready for her first ride the beginning of her sophomore year in high school. Hevenlee still has the car to this day. HevenLee never dreamed she would be a part of the business some day working along side her husband Brent and her father Noris.

As life would have it Brent and HevenLee were about to experience a parents worst nightmare. In 2001 their oldest daughter AMBER, who was 20 years old, was abducted from her grandparent’s home at Classic Truck and Auto body the evening of SEPTEMBER 14. Amber is presumed murdered and her body has never been recovered.

Words are not sufficient to describe the love and gratitude we feel in our hearts for the goodness of the people in Idaho Falls and the surrounding area who came to our rescue and never left us alone in our time of suffering and grief and sorrow. Everyone was so patient with AMBER’s family as they were going through unspeakable grief; all the while trying to continue to run a business and search for their daughter. It is with much deep sorrow that we were never able to bring her home and have our answers as to why, but we are still here and we are happy again and in a better place. Time does heal, but we would never have made it and be where we are today without all of you. We love you, Thanks for helping to bear our burdens.

In January of 2009 Noris retired and sold the auto collision repair business to Brent and HevenLee Hoopes. The fleet repair business was sold to Dennis Christensen. After 40 fabulous years at Classic Truck and Auto Body, Noris said this was the hardest decision he ever had to make in his life, and due to health reasons it came a little sooner than expected.

What a privilege it is to be blessed with this great opportunity to work hand in hand with your family, we look forward to continuing to serve this great community as third generation and carry on this great business that had its humble beginning in 1968 by two wonderful people Noris and Kathleen Burgener. 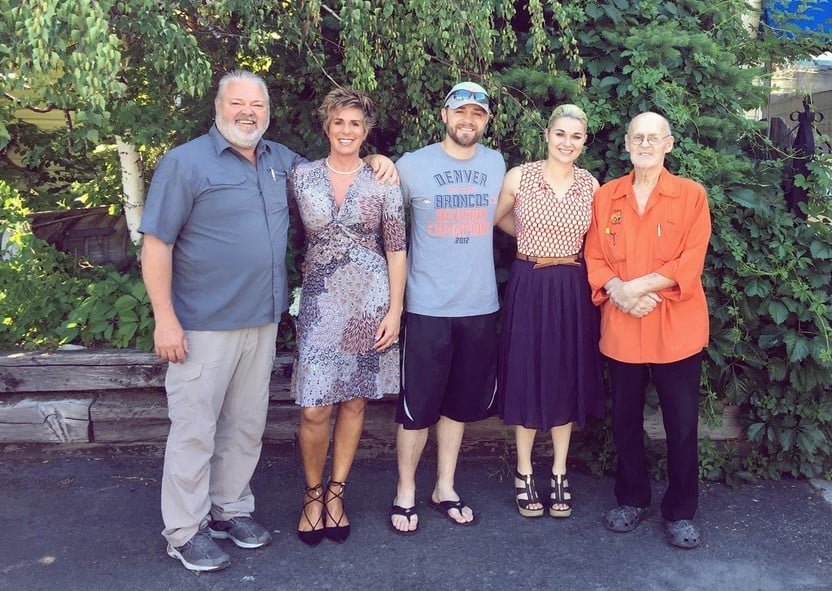 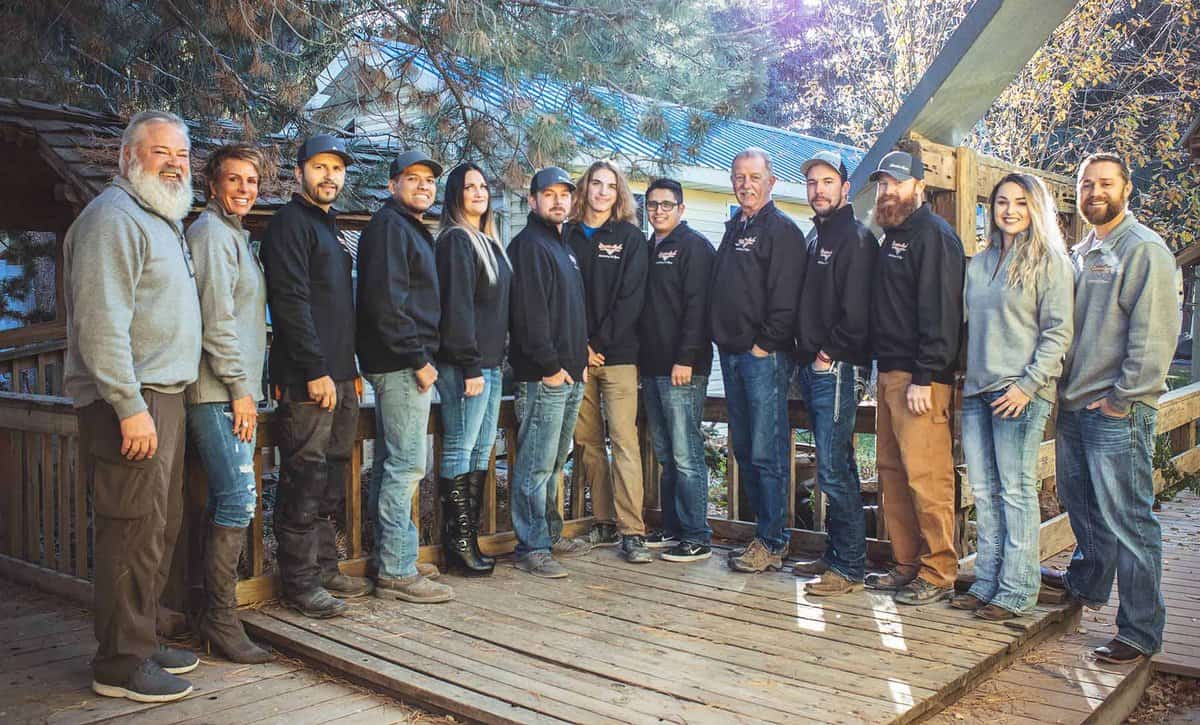 Contact us for a free estimate on the repair process of your vehicle. We work with you and your insurance company to get the job done quickly and with fair pricing. Expect great customer service from our certified technicians!